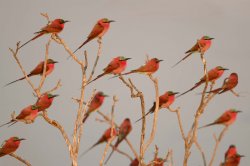 Considered by many to be one of the greatest wildlife sanctuaries in the world, Zambia offers the opportunity for an incredible photographic safari.  The concentration of animals in the South Luangwa National Park is among the most intense in Africa; it is home to sixty species of mammals, including elephant, lion, zebra, giraffe, wild dog, buffalo, hippo and antelope, and has a reputation of being one of the best places in Africa to see leopard.  It is well known for its diverse birdlife, including colonies of colourful southern carmine bee-eaters; a summer migrant, which arrives during in late August and early September, where they gather in their hundreds at their breeding sites on the steep sandy banks of the Luangwa River. 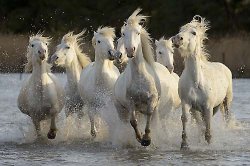 The thrill of photographing the world renown Wild White Horses of the Camargue running through the shallow waters of the marshes, and galloping in the surf of the Mediterranean Sea is a dream come true for any photographer passionate about wildlife; however, the excitement does not stop there, as in addition to a variety of shoots with the horses you will also photograph a herd of imposing Black Camargue Bulls being driven by a team of Gardians and stunning Camargue birdlife, including flocks of Pink Flamingos as they take flight in formation at sunrise.

Simon Stafford Photography: wildlife, travel, and landscape photography, photography seminars, workshops, and photography tuition. Technical Editor of Nikon Owner magazine, the author of twenty-five books about the Nikon camera system, and a regular contributor to the UK photographic press, Simon is the Overall Winner, Mammals Category, in the Wildlife Photographer of the Year 2016 competition.